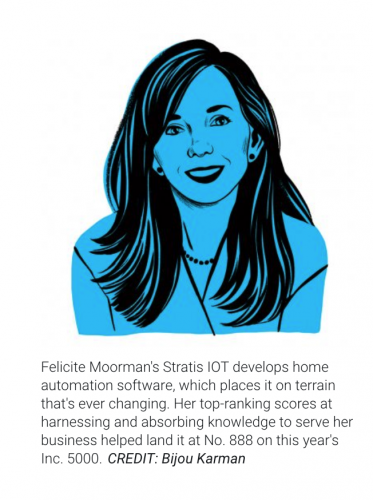 Felicite Moorman is an attorney turned multi-exit technology entrepreneur. ​She’s​​ received​ ​EY’s Entrepreneur​ ​Of​ ​The​ ​Year®​ ​Award​ ​and​ ​has​ ​earned​​ an​ ​international reputation ​​as​ ​a​ ​go-to​ ​IoT​ ​industry​ ​expert,​ ​developing​ ​pioneering ​​strategic​ ​partnerships and​ ​unprecedented​ ​technology​ ​strategies​ ​and​​ initiatives​ for ​the​ ​Internet​ ​of​ ​Things.

Moorman is the CoFounder of STRATIS, a RealPage Company, and SaaS Platform for large-scale Internet of Things installations. STRATIS was named a top ten “Best Company in America” by Entrepreneur Magazine and ranked in the top twenty percent of Inc Magazine’s “Fastest Growing Companies” three consecutive years prior to acquisition. Moorman was simultaneous CEO of BuLogics, which designed, built, and certified hardware, software, and ecosystems for the Internet of Things.

Moorman​ has​ ​been​ ​featured as a thought leader​ ​in​ U.S. News & World Report, Fast Company, Inc Magazine, Entrepreneur Magazine, and others. She’s also a frequent speaker on the Internet of Things and has been featured at CES, SXSW, Samsung DevCon, Eric Ries’ Lean Startup Conference, and Smart Cities Innovation Summit Asia.

Felicite attended the University of Maryland School of Law, where she was awarded their Inaugural Law Leadership Scholarship and received her Juris Doctorate in 2002. During her time at Maryland she served as an Executive Board Member of the Maryland Public Interest Law Project and became a Law School Club Founder in 2003.

Felicite is currently licensed to practice law in Maryland, Washington, D.C., and Oklahoma.